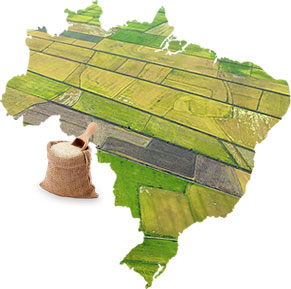 Except for Asia, Brazil is the largest producer and consumer of rice. Its average yearly production totals some 15 million tons of unmilled rice to meet the consumption needs of 12.14 million tons. The country is part of Mercosur (Southern Common Market), along with Argentina, Paraguay and Uruguay. This economic bloc has an average annual supply of over 20 million tons of rice (husk base), of which 7 million tons are aimed at exports to other or intra-bloc countries. This available volume represents 18% of the total to be leveraged through international trade in 2013/2014.

Over the past five years, Brazil has exported an annual average of 1.2 million tons of rice, supplying 2.07 million tons in 2011, attesting to its logistical efficiency and capacity. Furthermore, due to its continental proportions and the cutting-edge technology employed in industrial processes, the country is quickly able to expand its offer of the grain in the face of global demand.

Of the Brazilian crop, around 75% – or 9 million tons – is harvested in the south of the country, in the states of Santa Catarina and Rio Grande do Sul, on an area of 12,500 km2, in a subtropical climate. An irrigation crop cultivation system is used, with an average yield of 7.5 million kilograms per 10,000 m2. The cereal for export originates entirely from this region. The rest of the national harvest, cultivated in other regions, is geared towards domestic consumption.

In the 2012/2013 harvest, the Gross Production Value (GPV) for rice in the country reached BRL 8 billion, or almost US$ 4 billion. The activity generates 350,000 direct and indirect jobs.

According to official statistics, Brazil has over 1,100 cereal processing industries. Of these, around 70 are considered medium to large, supplying 85% of the domestic market. Approximately 40 companies operate with exports, aligning efficiency in processing, the offer of multiple products and a validated logistical capacity to meet different demands. With sectorial programs and the qualification of process and technology, more companies are finding their way into the foreign market.

Brazil has a highly qualified and innovative rice industry that boasts a high technological standard, with a focus on exclusive and efficient service to the most demanding requirements of international food supply. Domestic companies offer expressive flexibility in meeting specific needs sought by consumers from different countries, based on logistical and consumption characteristics.

The quality of the Brazilian grain is a competitive edge in global trade, with a consolidated presence in over 70 countries from Africa, South America, the Caribbean, Middle East and Europe.

Over the last decade, the country has evolved in position from one of the 10 largest global importers to the sixth largest exporter, in 2011. This experience has given rise to a modern and efficient trade, industrial and logistical structure geared towards the international market. The stability of offer provides further support in insertion within global trade spheres, along with its competitiveness and tradition in free trade.